During PAX dahanese and OverloadUT showed off some exclusive content from DLC #2.

Arkfalls can now be called down and the possible impact sites are displayed on the map. 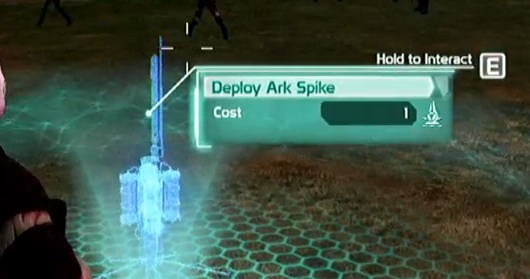 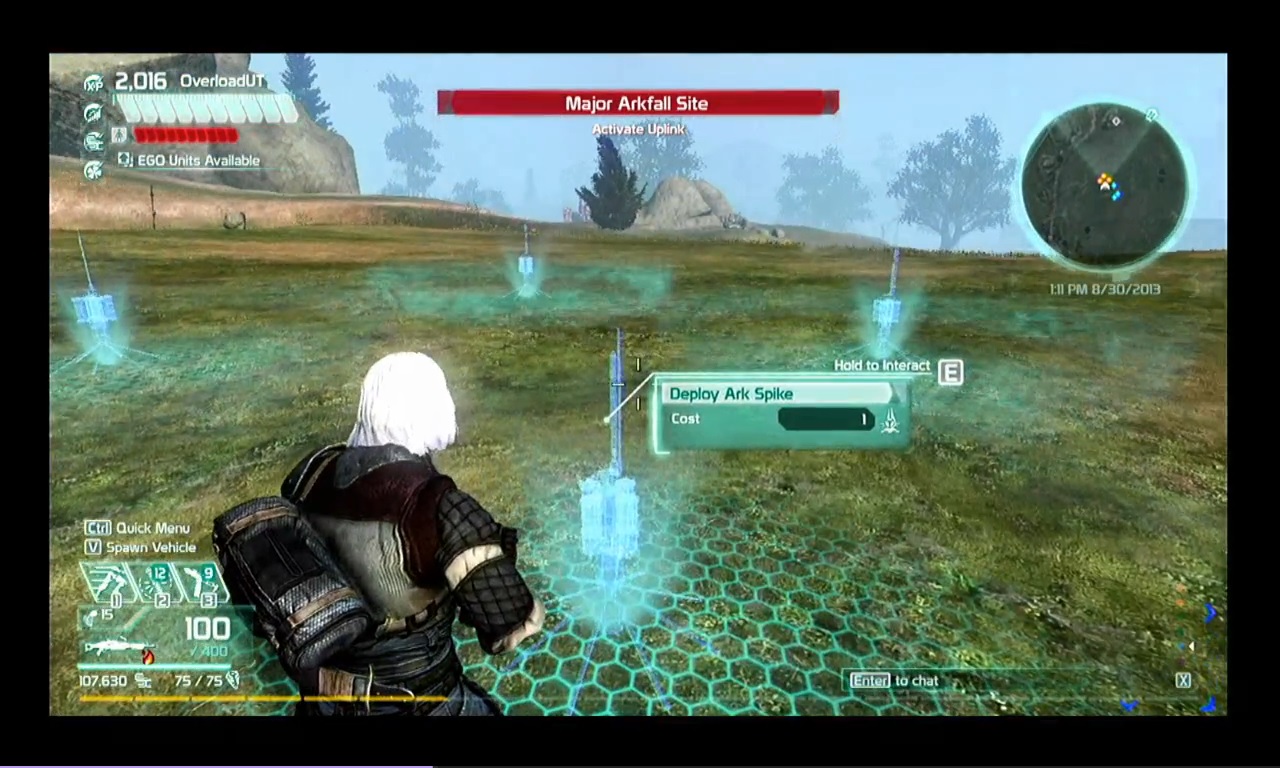 To call them down you have to deploy an Ark Spike, no information is given on how to obtain these items, but it is something I can see being in the cash shop. 1 Ark Spike is needed for a Minor Arkfall and 4 are needed for a Major. 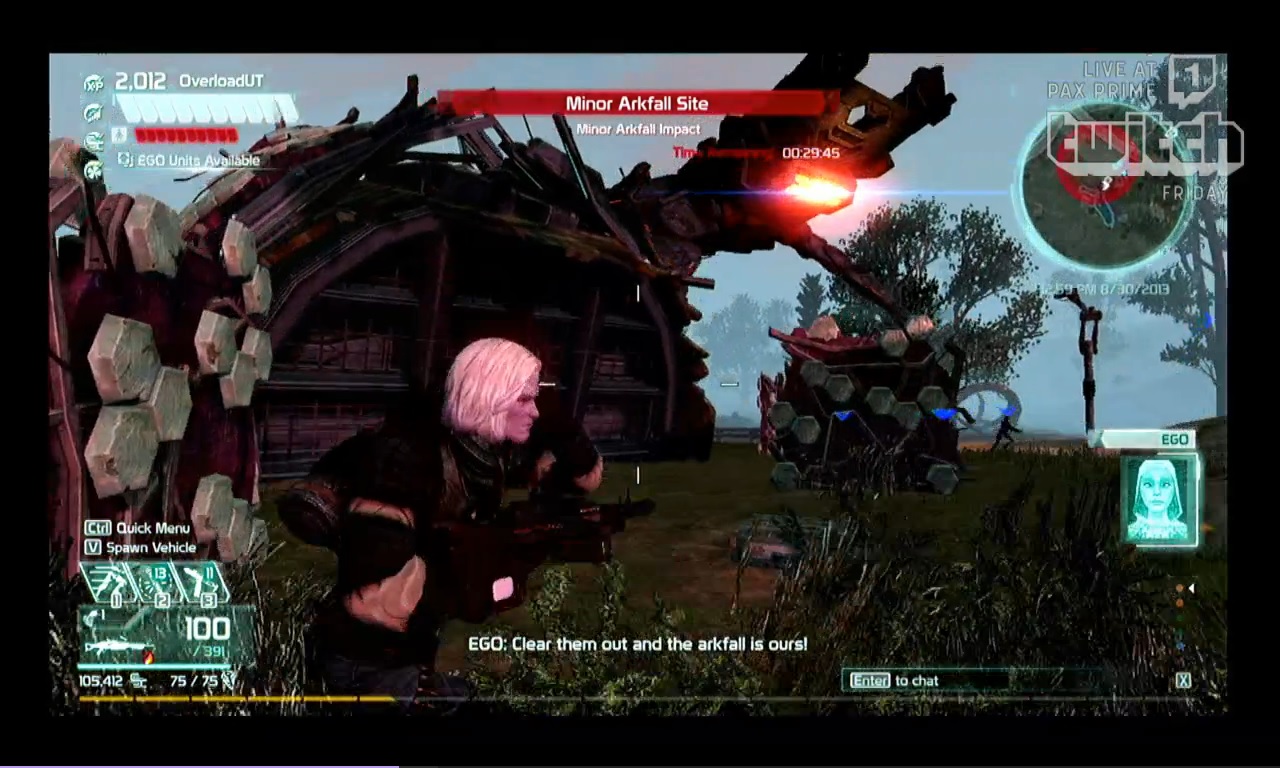 A Minor Arkfall impact site, enemies spawn outside the ship.

Once cleared you can enter the ship, these are instanced arkfalls for up to 16? players. 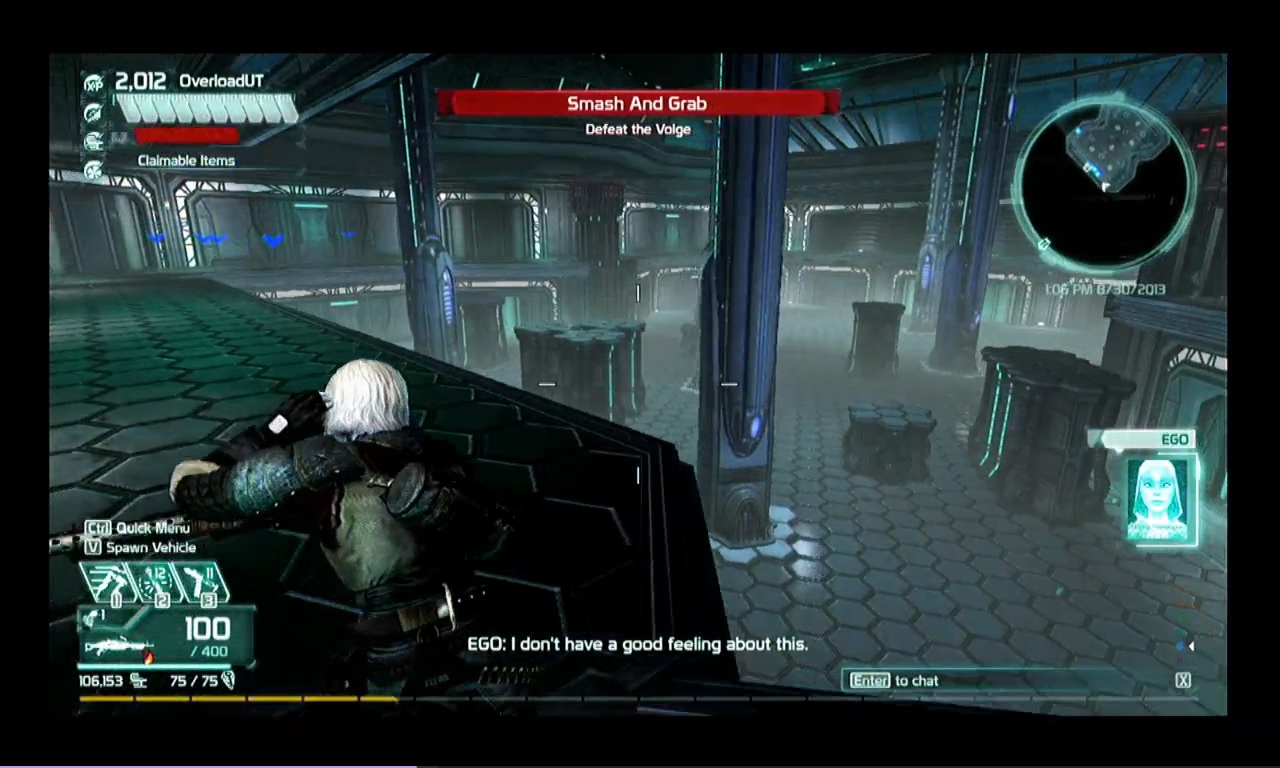 Inside of the ships are randomised. 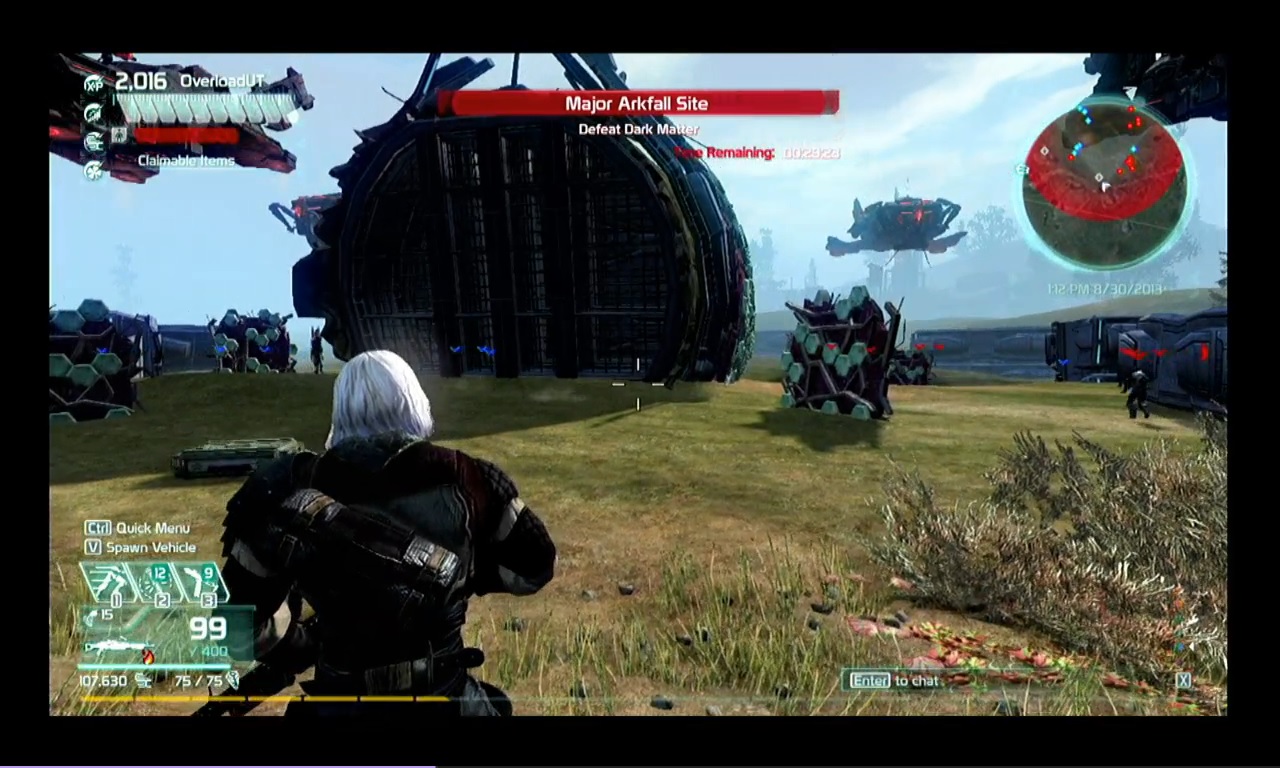 The outside of a Major Arkfall. 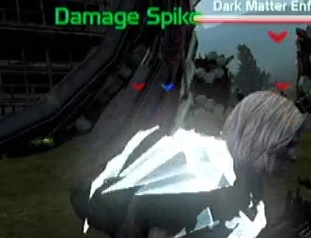 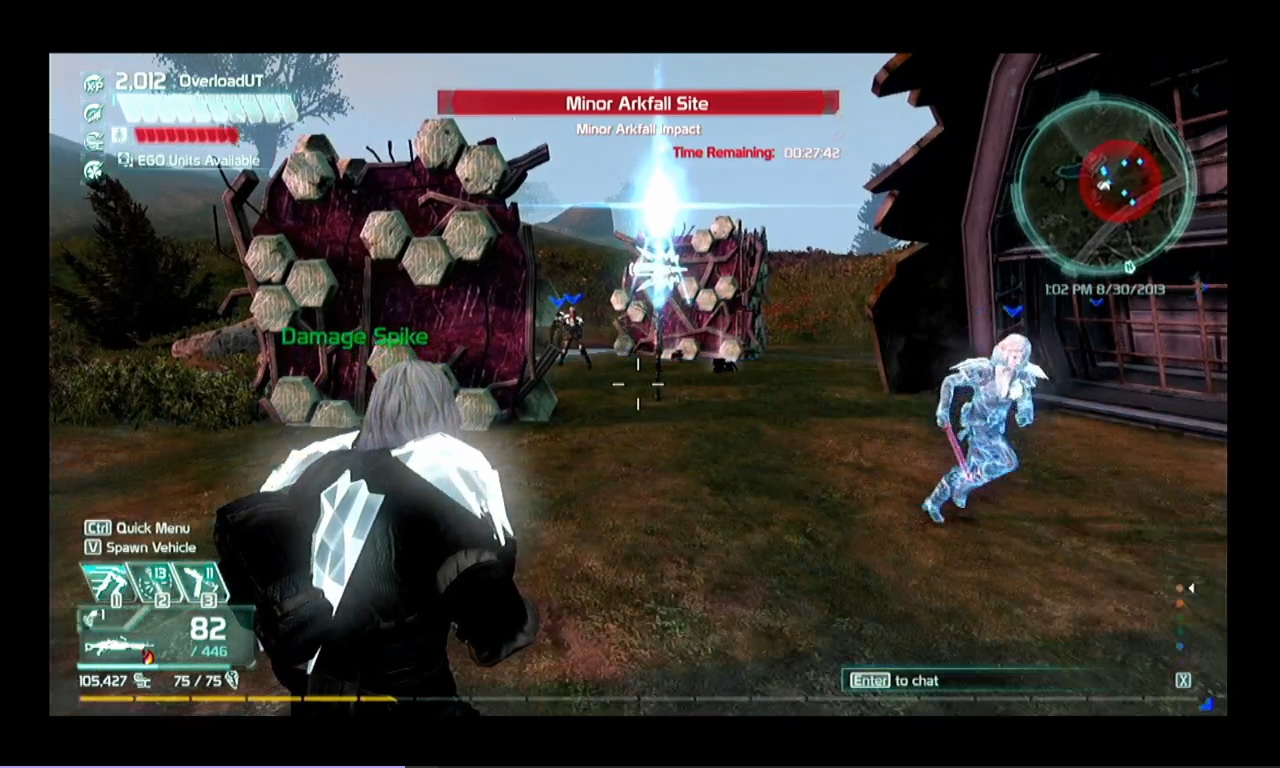 Group buffs from an item in the area. Damage boost and Ammo Regen.

Grenades now have ammos for each type, designed so that the ammo is now the limiting factor on using them not the recharge time. The recharge time will be lower. You will be picking up grenades like ammo. 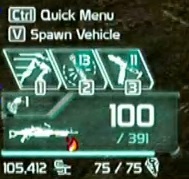 The weapon bar on the bottom left of the screen has changed, it now shows the nano effect of the weapon, amount of grenades, and the status of your EGO Power, Spikes and Stims. The call vehicle has moved to just above it.

There seem to be new inverted arrows displaying enemies and friendlies, Red for Enemies, Blue for Clan and I can only imagine Green for Group. 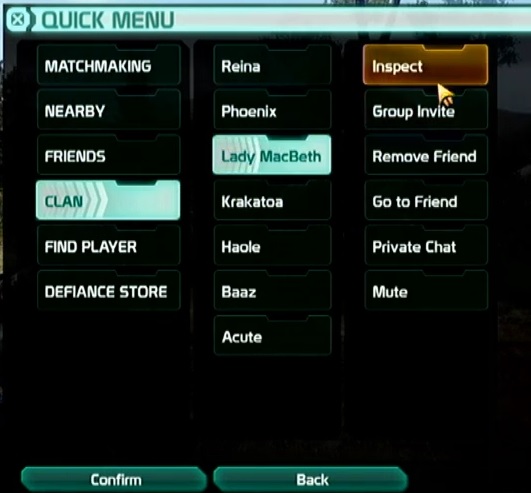 The Quick Menu has been given an overhaul, the screen is now bigger, but I have seen no improvements to the long chains of menus you have to go through to perform some actions. 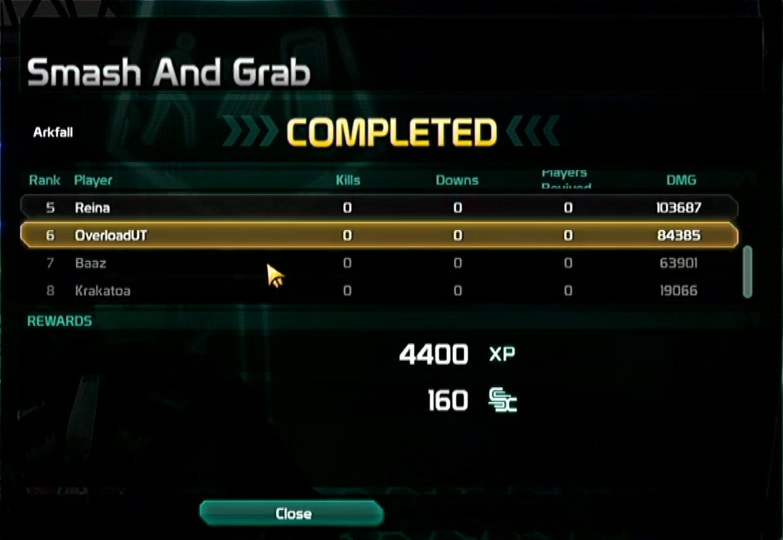 A new enemy spotted is a Volge Hunter Drone.

Thanksgiving in Defiance and Defiance 2050!

Was there a please in there somewhere? I have fixed the image links in this article.

We got another glimpse of DLC 2 during a developer livestream. - http://www.defiancedata.com/page.php?id=92

I haven't really played the first DLC yet, because it is just another race against a (freaking) clock ...

I Even haven't finished geh Story because nim kills me all the Time (and After 5 times i have no Fun being killed - and later i have no Fun Going the whole Way again) ... Which sucks / both sucks

The preview of the second DLC is not interesting enough to keep people in the game or bring them back to it.

gta, diablo and other upcoming titels should bring up some major concerns to the developers ...

Furthermore imho is the lost of group player another big problem - is here a Clan? Since i would Love to stay at defiance ...

And did they stay anything about Going on nextgen? The will lose Players to destiny if they won't do anything ...

Yeah, this is essentially raids, but I wonder about the mechanic because I don't ever want to be split up from my group / clan (if I had one).