Sieges are public events where ark hunters defend areas of the map against waves of enemies. Sieges are represented by a blueish icon on the main map.

When you hover over the icon on the main map, you will see the remaining duration. Also the duration is indicated in the circle like a clock face.

If you are nearby, it will show on your HUD

What happens during a siege

Sieges are limited duration, the objective, time remaining, progress through the stage and stage number will display on the top of your screen.

After you wipe out all the enemies in a wave, another wave will spawn.

During sieges you will need to defend several points on the map from waves of enemies, you start off with a single point and more points will unlock as the event progresses.

Letters will appear on the summary at the top of the screen and visually on your HUD. 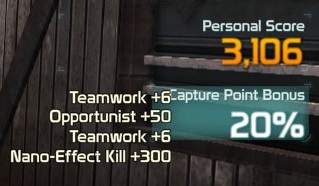 Your score is shown on the right of the screen under the minimap.

You raise score by shooting at enemies and performing various activities involved in killing them.

Each Capture Point secured will grant bonuses to your points. At the end of an event your score and statistics will show on a popup screen.

Your score will determine your reward tier, you will receive a healthy amount of experience, keycodes and a weapon.