This guide will explain how re-rolling an individual tier roll will work as well as the limitations and costs.  Not meant to be an in depth guide regarding "pre-patch" weapons as they have different rules.

So you decided to make a weapon with an undesired roll better. Keep in mind that which roll you choose is a semi-permanent choice (more on that under the section "Oops! I didn't mean to do that").

If you have a "pre-patch" weapon, this guide will not help you much as the rules regarding those weapons are different. A pre-patch gun is one which it is possible to have duplicate rolls on. If you are uncertain whether your gun is pre-patch or not; check the rolls against a weapon which physically dropped for you rather than something you purchased from another player or vendor. If the rolls match up (white reload is x.90 on both) it is a post-patch; if they do not match up (one has white reload of x.95 and the other is x.90) the one which you did not physically pick up is a pre-patch weapon.

Any roll which is currently on the weapon can be changed; from the tier 1 white roll up through the tier 6 supreme (banana). The cost associated with changing a roll is dependent on which rarity you wish to change:

This will also "lock" the rarity chosen so that you will be unable to change any other rarity tier.

The system allows you to change a roll to any roll which is available. Available rolls are ones which are a) not currently on a higher tier than you are re-rolling and b) an option for the tier which you are re-rolling.

What this means is that if you have a weapon with the following rolls: 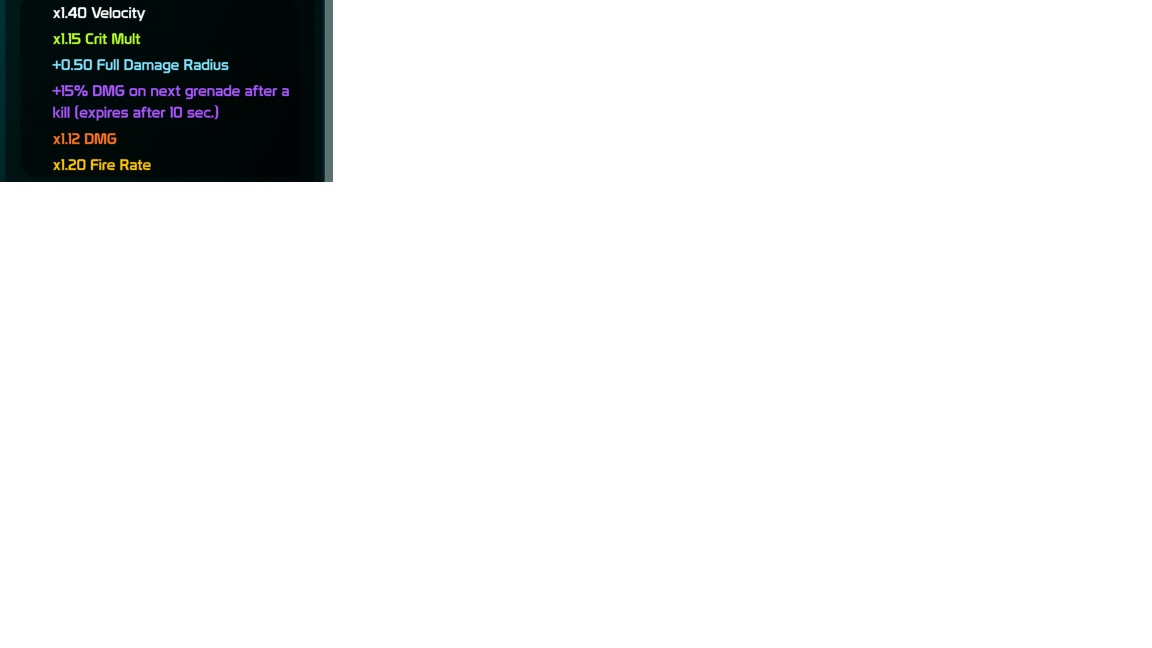 And you wish to change the green roll (1.15x Crit Multiplier in this case) you will be able to get  velocity, reload or mag size. You will not be able to get fire rate, full damage radius or damage as those rolls are already on the gun and at a higher rarity tier.

Let's see what happens when you reroll that green roll:

As you can see; the green changed to mag size. As I like this roll I have no reason to change it again. Pay attention to the lock symbol next to the green roll in the second picture. This informs you that this weapon a) has been rerolled and b) that you will only be able to reroll the green tier without first reseting the item to it's original condition.

The system allows you to roll a bonus that is at a lower tier than the one you chose to reroll. In the first picture if I had chosen to reroll the T6 roll (fire rate) I could have gotten any roll that is available for the supreme roll. Thus if I had rolled the supreme tier and gotten damage I would have a T6 damage roll. Of course the system does not allow for duplicate rolls on the same weapon anymore; so the T5 damage roll will have to change. That roll will ONLY choose from the bonuses not currently on the weapon. Meaning it could change to Reload, mag size or fire rate (as fire rate is no longer being used by the T6 roll). It is not possible to "cascade" rolls to change multiple rolls at the same time.

However; you can reroll as many times as you want and each time has a chance to be a roll which is on a lower rarity than the one being rerolled. Meaning with enough patience and arkforge you can effectively put any rolls you want on any weapon (provided the rolls are an option in that particular tier; E.G. velocity is no longer an option at the T5 level. Assuming that applies to the T6 level as well but I don't have concrete proof of that). This presents a potential problem which will be addressed in the final section of this guide.

Oops! Did I do that?

Using the example from above; let's say you decide you didn't like the result and you actually wanted crit multiplier as the green roll.

Well, looking at the salvage matrix you will see a new option for that weapon labeled "Reset Tier Bonuses" below the change rarity bonus in the picture below:

Using that function will return the weapon to it's state before you changed any tier bonuses; regardless of how many times you changed the bonus or what other bonuses it may have changed. This will also remove the lock on the tier bonus; allowing you to reroll a different bonus should you so choose.

Cautionary tales are all the rage money can buy

Just a final note that if you are purchasing a weapon from someone and it has a lock symbol on one of the tier bonuses; you have to assume the responsibility that if you reset the tier bonuses you might not know what you are going to end up with. It is possible to change multiple rolls which are lower rarity than the one which shows the lock and those have NO indicator to inform you that they have been changed. It is recommended that when purchasing a weapon which has been tier locked that you purchase it as is and understand that if you reset the tier bonuses you may end up with a weapon you don't like.

Purple rolls are the exception to this as they cannot affect the other rolls; thus if it's a locked purple roll you can be certain that resetting the tier bonuses will only change the purple roll.

Great guide. Specially for me that I had never tried re-rolling a weapon.