This guide will talk about the new Shrill enemy and their arkfall.

Shrill are a new type of enemy added to the Silicon Valley region of the Bay Area. The Shrill are a plant like enemy that come with their own unique arkfall located only in Silicon Valley. So far only three different type of Shrill are in the game. They are the leech, stalker, and feeder.

The leech shrill is a small fast moving worm like enemy. They will move up to you and will explode if they are close to your character for too long. They can be killed by anything but a rad gun works best against them. As you can see below the leech shrill are very small so a shotgun are explosive gun will work best against them cause a charge blade will require you to be up close to damage them which is a bad idea cause they will explode.

The next Shrill is the stalker. The stalker is bigger than the leeches but move at about the same speed. Just like the leeches they will explode if you get to close to them but will also do other attacks that are similar to a hellbug warriors except instead of breathing fire they will breath a radiation like gas that will do massive damage. The best way of killing the stalker shrill is to either use a rad shotgun or explosive cause they will move around a lot making them hard to hit with a smg or pistol. The stalker shown below have critical spots located right at their head which is the yellowish green part of their head. 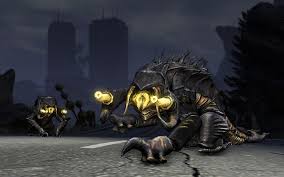 The next shrill are the feeders. The feeders are the biggest shrill but the most deadly. They act like a hellbug archer but will fire radiation and can slow you down. The feeders are best taken out by sniping them from afar cause if they hit you they will weaken you so much that a the next attack will down you no matter what your ego level is. The feeders projectile can also leave behind a pool of radiation that will damage you if you walk across it so be very careful of that. As you can see below the feeders sorta look like archers but are much more powerful.

The Shrill arkfalls will only occur in Silicon Valley and so far are only minors. Major arkfalls may be coming but for now we only have minors. A shrill arkfall is called shrill emergence and will appear on the map. When you enter the arkfall area it will say kill the scrappers. This is a small bug but you will have to kill Shrill not scrappers. The arkfall is black with green spots over it so you can identify it from a distance. The fight starts with about 25 or so leeches. The 2nd wave is about 20 leeches and about 5 stalkers. The 3rd wave is about 20 leeches, 5 stalkers and 1-3 feeders. Finishing the arkfall rewards you with the same items as a regular minor. Doing these arkfalls is highly recommend with rad weapons and at least 3 other people cause if you do this solo you will go down a lot. Other than that have fun killing the new Shrill and don't die so much.